The incident caused widespread damage to houses, infrastructure, and vehicles. Muddy water swept into people’s homes in Erbil‘s Daratu, Qushtapa, Shamamk, Zhyan, Roshinbiri, and Bahrka neighbourhoods in the early hours of the morning, forcing individuals out of their houses. According to the Kurdish region government on 19 December, 14 people were reported dead by the floods and more than 7,000 people are affected by these floods, while IRCS carried further rapid assessments to confirm with the affected families. More are feared missing while search and rescue operations are ongoing. Officials urged residents to stay off the roads and avoid flooded areas. The floodwaters had receded, and government authorities had started to clear flood debris in affected areas.

Iraq has witnessed record-low rainfall this year, but officials have warned of sporadic heavy rains due to climate change. Experts have warned that record low rainfall, compounded by climate change, is threatening social and economic disasters in war-scarred Iraq. The disastrous heavy rains came at a time when Iraq was suffering with severe droughts, where seven million Iraqis have been already affected and most of the agricultural land is completely affected by the droughts spell and left people with more vulnerabilities.

Iraq is at risk of multiple disasters ranging from the natural disasters such as drought, sandstorm, heatwaves, floods, desertification and epidemics to man-made ones. Due to its diverse topography, Iraq is exposed to multiple natural hazards. Floods and epidemics pose the greatest risks in the country, followed by earthquakes and drought. The number and frequency of disasters is growing. These disasters accounted for approximately 45 per cent of deaths and 80 per cent of economic losses from disasters in the country. 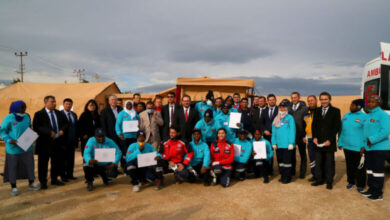 TIKA provided great support to the health system in Africa