Authorities in Armenia-occupied Karabakh say more than 100 fighters were also wounded in clashes with Azerbaijan’s soldiers. Separately, Baku says it has captured seven of its Armenian-occupied villages in heavy fighting.

Sixteen Armenian servicemen have been killed in Armenia-occupied Karabakh after heavy fighting broke out between the republics of Azerbaijan and Armenia.

“According to preliminary data, 16 servicemen were killed and more than 100 wounded” since fighting erupted, authorities in the disputed region said, while both Baku and Yerevan reported civilian casualties on Sunday.

Azerbaijan also captured a “strategic” mounatin and seven of its Armenian-controlled villages in heavy fighting.

Fighting between both Caucasus neighbours broke out along the disputed region after Armenia attacked Azerbaijani civil and military positions, while Azerbaijan “liberated seven villages” during its counter-offensive.

“We have liberated seven villages,” a Defence Ministry spokesperson said. 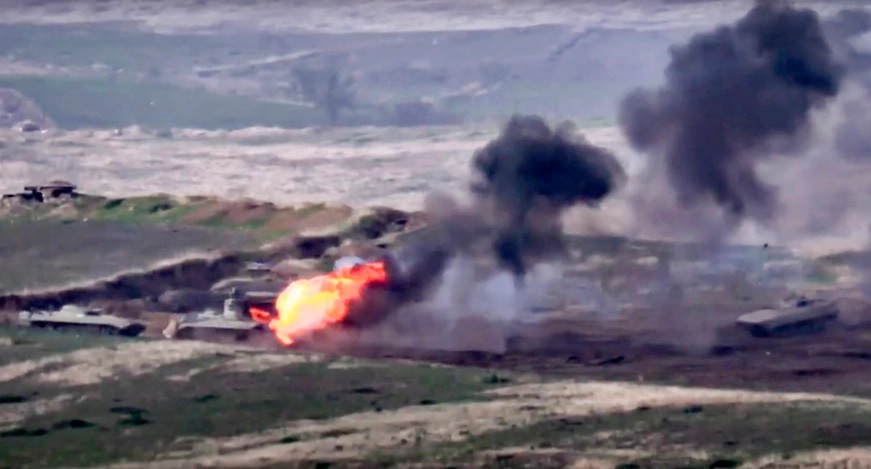 “Moreover, the enemy’s positions in the direction of Aghdara and Murovdagh were destroyed, and strategic heights were taken under the control,” the ministry added.

Baku said an Azerbaijani family of five was killed in Armenian shelling.

“As a result of artillery shelling a family comprising five members was killed in (Azerbaijan’s) village of Gashalty,” the office of Azerbaijan’s prosecutor general said in a statement.

Azerbaijan’s Parliament declared a state of war in some of its cities and regions.

“Martial law will be introduced as of midnight as well as a curfew from 9 pm to 6 am,” in Baku, several other cities and districts that are close to the Karabakh frontline, presidency spokesman Hikmet Hajiyev told journalists.

“As a result of the enemy fire, there are casualties among the civilian population and our servicemen. Some people have been wounded. May Allah rest our martyrs in peace,” he said, without mentioning any specific numbers on casualties.

Aliyev vowed to avenge the “blood of martyrs,” saying the Azerbaijani army continues retaliation against the Armenian military positions, and that many units of its military equipment have been destroyed.

“This is another manifestation of Armenian fascism,” he said.

The Azerbaijani leader said Armenia continues its illegal settlements in Azerbaijani territories and that “Azerbaijan defends its lands, Upper Karabakh belongs to Azerbaijan.”

In western Azerbaijan, the residents of a village under attack by Armenia asked for international help to end their suffering.

Israil Haciyev, who lives in the village of Kapanli in the city of Tartar, said they are frequently fired upon by Armenia with heavy weapons.

“Women, the elderly, children, all are leaving their homes,” he told Anadolu Agency.

“Let the whole world hear us … such torment cannot be tolerated,” said Ibrahim Zamin, another local.

“What is the world doing?”

TRT World’s Andrew Hopkins reporting from Ankara said the fighting is still continuing and there are causalities both in terms of civilians and also members of the military.

“What Azerbaijan government says is that from six in the morning Azerbaijani forces came under shelling from Armenia. Azerbaijan responded and during those clashes, 12 aircraft missile defence systems were destroyed,” Hopkins said.

Meanwhile, Turkey vowed complete support for Baku and called on Armenia to give up its “aggression.”

“We strongly condemn the Armenian attack in Azerbaijan front line, which caused civilian casualties and was a clear violation of international law,” Turkish Foreign Ministry said in a statement.

Azerbaijan’s Defence Ministry denied the claim that its helicopters and tanks had been hit.

“We will support our Azerbaijani brothers with all our means in their fight to protect their territorial integrity,” Turkish Defence Minister Hulusi Akar said.

Turkish President Tayyip Erdogan called on Armenia’s people to take hold of their future against “leadership that is dragging them to catastrophe and those using it like puppets.”

“We also call on the entire world to stand with Azerbaijan in their battle against invasion and cruelty,” Erdogan said on Twitter, adding that Turkey will “increasingly continue” its solidarity with Baku.

Tensions between the two nations escalated in July this year when the Armenian troops violated a ceasefire agreed in 1994 and attacked Azerbaijani positions with artillery fire.

International efforts to settle the conflict have stalled and fighting sporadically breaks out.

France, Russia, and the US have mediated peace efforts as the “Minsk Group” but the last big push for a peace deal collapsed in 2010.

The pro-Armenian militia occupied the Karabakh region of Azerbaijan in 1993.

The Parliamentary Assembly of the Council of Europe refers to the region (in Resolution 1416) as being occupied by Armenia.